The ctx hosted project on PyPI was taken over via user account compromise and replaced with a malicious project which contained runtime code which collected the content of os.environ.items() when instantiating Ctx objects. The captured environment variables were sent as a base64 encoded query parameter to a heroku application running at https://anti-theft-web.herokuapp.com.

If you installed the package between May 14, 2022 and May 24, 2022, and your environment variables contain sensitive data like passwords and API keys (like AWS_ACCESS_KEY_ID and AWS_SECRET_ACCESS_KEY), we advise you rotate your passwords and keys, then perform an audit to determine if they were exploited.

The original and sole releases prior to the compromise are still available as:

Once notified, a PyPI administrator confirmed that all current releases on the index contained a similar exfiltration mechanism in the contents of the ctx.py file of the release files:

Note: Above code is reduced to core mechanism for clarity.

With the malicious nature of all release files confirmed, the PyPI administrator used existing tools to:

The activity log of the user, action log on the project, metadata for all historical uploads (including malicious), archives of the files, and their locations in object storage were backed up for further analysis.

The PyPI administrators made the decision not to restore the original files at this time, as PyPI policies state that actions on the index including deletion are immutable.

If there is sufficient reason to restore the removed files a process that complies with that contract will need to be developed.

The ctx project was registered and uploaded to PyPI in 2014. According to Libraries.io, the project on PyPI that declares it as a dependency is context-engine. No known repositories that Libraries.io analyzes declares ctx as a dependency. This is additionally confirmed by https://deps.dev/pypi/ctx/0.1.2/dependents.

In total we estimate that 27,000 malicious versions of this project were downloaded from PyPI, with the majority of “overage” downloads being driven by mirrors.

This hypothesis is supported by data from analysis of requests to https://pypi.org/simple/ctx/ showing no associated rise in simple traffic from installers. 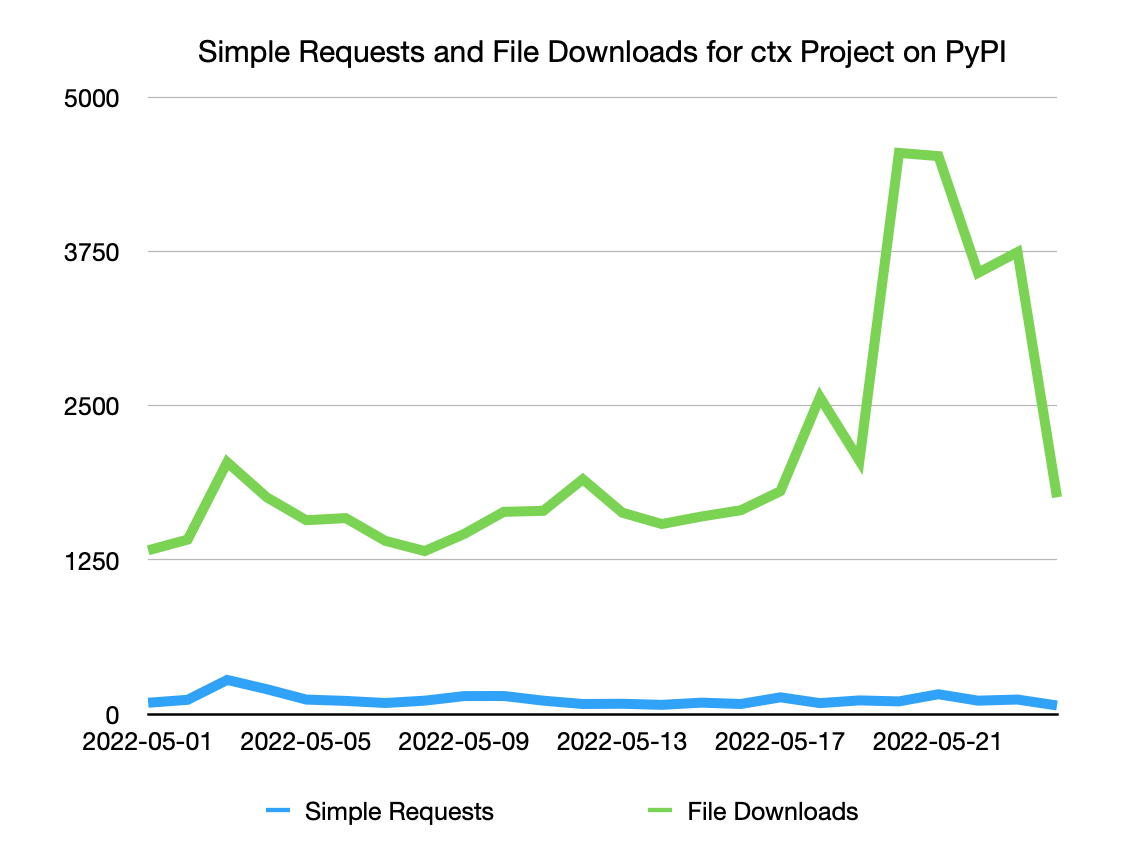 Domain takeovers are a known attack vector for compromising individual user accounts on PyPI. PyPI administrators have responded to reports in the past of publicly visible email addresses associated with project metadata containing expired domains, which happened to match the domains of owner user accounts for projects.

Performing this analysis on an ongoing basis and freezing accounts with expired or near expiration domains is a potential mitigation that could protect absent maintainers in the future, at the cost of increased support burden on the team of PyPI moderators and admins.

We also advise all PyPI users, but especially project maintainers, to enable multi factor authentication on their PyPI accounts following the references at https://pypi.org/help/#twofa.

Additionally, version-pinning and using hash checking mode would prevent this attack, which depends on users automatically upgrading to the latest available version at install-time.

The safety and pip-audit projects can be used to check for known vulnerabilities in your dependencies: